With over 60 shops all over the city, Yewale Amruttulya has already won Pune’s heart and slowly spreading its roots all over Maharashtra. Also, what adds cherry to the cake or we would like to say – sugar to the tea is the fact that they also have a shop in Paris! 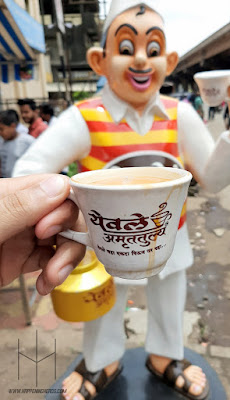 Yewale Amruttulya’s tea is trending in every tea lover’s conversation in Maharashtra at the moment so we decided to head to our nearest Yewale Amruttulya outlet and decided to try it ourselves as their catchy tagline, ‘येवले चहा, एकदा पिऊन तर पाहा…’ suggests. As we entered the outlet, we felt like stepping into a humongous tea-preparing factory and this is the reason why majority of customers keep some of their time aside just to witness this amazing scenario.

Started back in the year 1983 at Pune under the name of ‘Ganesh Amruttulya’ back then, Yewale Amruttulya’s journey been onwards and upwards from there and the sea of tea lovers waiting outside their outlets all over the states justifies this fact, credits to the hard-work and brilliant business planning put in by the Yewale family.
Unlike many hotels that serve tea in a glass, Yewale Amruttulya prefers serving their tea in a thick cup because they believe that the tea served in a cup tastes better. Yewale Amruttulya uses a special kind of machinery to heat the milk, which assures that customers don’t need to wait much for their cup of tea. We were also quite impressed with the way they have taken care of the hygiene at their outlets.
Coming to the taste of tea served here, we couldn’t resist ourselves from falling in love with it as soon as we took the first sip. The tea served here has its own unique taste as Yewale Amruttulya make use their own tea powder and masala. Also, the content of milk added here is pretty high as compared to the tea served at other hotels which adds to its overall texture. To our amazement, no food items are served here apart from the tea maybe because it helps people to concentrate more on their tea with whole heart!
We got to know that Yewale family comes from the Purandar Taluka in Pune and they used to sell milk in the past. Though their milk business was not so emphatic but still, some liters of milk used to remain after the distribution on daily basis. This is when the idea of opening a tea stall strike their mind and they opened one in partnership with one of their friends in a military area. Later, they opened their own hotel in Pune’s Salisbury Park with the name of ‘Ganesh Amruttulya.’ As all the family members were involved in this business, they started working towards making it a franchise. After a lot of marketing research, Yewale family opened their first ever ‘Yewale Amruttulya’ hotel at Bharti Vidhyapeeth in 2017, which started getting a tremendous response because people loved the taste of tea served there and rest is history.
At present, Yewale Amruttulya’s business is blooming and so is the number of their outlets in and around the state. Yewale family has proved the fact that nothing can stop you from conquering the world if you keep the taste and standards of your preparation intact, even a basic commodity like tea can earn you big profits!
ALSO READ: STREET FOOD TRAIL ON NASHIK’S HAPPENING COLLEGE ROAD

Written By
happeningheads
More from happeningheads
The carnival of India‘s domestic season started with the much-awaited Maharashtrian...
Read More