Simmba is an action-packed Bollywood blockbuster movie with a gripping story, directed by Rohit Shetty and
written by Yunus Sajawal and Sajid – Farhad. We really liked this movie because this
movie has not only carried forward the legacy of Singham franchise with precision but also managed
to shift the focus from a blockbuster like Dabangg in this genre – credits to Ranveer
Singh’s brilliant performance as Sangram Bhalerao, an orphan who grows into a rather interesting cop and the way Rohit Shetty
has effortlessly included a variety of elements to this movie with utmost
precision. 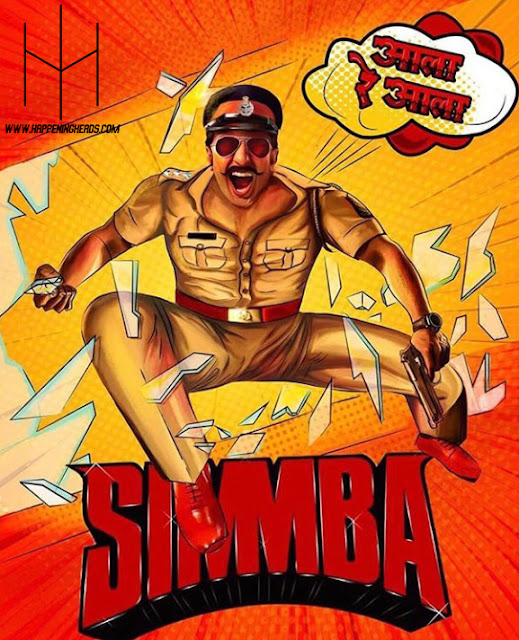 Simmba is a story of an orphan named Sangram Bhalerao, born in Shivgadh (the
same place where everyone’s favourite – Singham was born and brought up). But
to everyone’s surprise, he seems nowhere inspired from Singham and actually
believes in the fact that a corrupt police officer’s life is an ideal one and
it’s perks are what inspires him to become one of the lot. In the process of
enjoying the life he had always dreamed of, he loses someone very close to his
in the most unfortunate way which hampers him emotionally and he eventually
decides to make the right use of his power.
The action scenes of Simmba are very well filmed and Ranveer Singh has
certainly done the justice with his pumped-up body. Trust us, every time you
will see Ranveer Singh flaunting his ‘Police’ tattoo in anger, you will feel
the intensity. However, we personally liked the fight scene between Sonu Sood
and Ranveer Singh, accompanied by Ajay Devgn as it was nothing less than a
visual treat for us.

Sara Ali Khan has played the role of Priya Bakshi
– daughter of a martyred encounter specialist, who runs a food joint delivering tiffin
service to the Miramar Police Station. She has looked gorgeous throughout the
movie (especially in the songs) that we can’t blame Simmba falling in love with
her!

On the other hand, Sonu Sood has once again
nailed the role of villain like a boss. We couldn’t have imagined anyone else playing
the character of Durva Ranade other than him. He has looked awesome throughout the movie with his well-toned
body and intense look.

We would personally like to
appreciate the supporting roles of Ashutosh Rana as Nityanand Mohile, Siddhartha
Jadhav as Santosh Tavde, Vijay Patkar as Alok Borker without which Simmba wouldn’t
have achieved this kind of success. Also, Rohit Shetty deserves a pat on the
back for casting majority of Marathi actors in the film because all of them
have done a great job playing their respective character and have a lion’s
share in the success of Simmba.
We would urge everyone to watch
this movie because it has very-well addressed a sensitive issue and suggested
measures to punish the criminals in a manner, we always wish for after hearing
the news about rapes. Apart from this, Simmba has also  given important messages like never underestimating anyone, avoiding the
intake of alcohol as it can distract you from your duty at times, teaching your
sons and brothers the correct way of treating girls/women, standing by what’s
right leaving the relations aside and knowing the right motive behind your
uniform.

Written By
happeningheads
More from happeningheads
There’s no better thing than luxury and good food combined together and...
Read More