Royal Challengers Bangalore bagged an easy-peasy 6-wicket win over Delhi Daredevils in IPL’s Match 19 – RCB v DD 2018. It looks like they have finally found a perfect balance across various departments after struggling in the initial stages of the tournament. 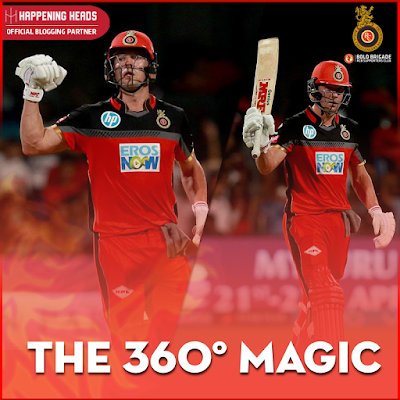 Delhi Daredevils were put into bat by Captain Kohli, who won the toss at M. Chinnaswamy Stadium. Umesh Yadav took no time to draw the first blood on the hosts by dismissing their skipper – Gautam Gambhir cheaply in the early stages of the game.
Shreyas Iyer and Rishabh Pant took the initiative and helped DD recover by building a solid 75-runs partnership. Rishabh Pant continued to dominate even after Shreyas Iyer’s wicket and played a flourishing knock of 85 runs off 48 balls.
Yuzvendra Chahal once again proved to be the sheet anchor of RCB’s bowling attack by picking up couple of wickets and was well supported by Umesh Yadav, Washington Sundar and Corey Anderson, who picked 1 wicket a piece. Delhi Daredevils managed to score 174 runs with the loss of 5 wickets in their quota of 20 overs, even after a rough start.
Chasing the target of 175 runs, Royal Challengers Bangalore seemed to be stuck somewhere in the initial 5 overs as their openers were sent back to the pavilion without letting them put much runs on the board. However, the experience duo of Virat Kohli and AB de Villiers took no time to shift gears and added 63 valuable runs for the 3rd wicket partnership. Virat Kohli’s chase came to an end after Trent Boult took an extraordinary catch, whiskers before the boundary line!
After Virat Kohli’s dismissal, AB de Villiers took whole responsibility on his shoulders and never let the pressure mount on his team. He was well-accompanied by Mandeep Singh at the end, which helped RCB pass the finish line in 18th over with 6 wickets to spare. AB de Villiers was awarded Man of The Match award for his unbeaten knock of 90 runs from 39 balls, which consisted of 10 boundaries and 5 sixes.
ALSO READ: RCB v KXIP 2018: ROYAL CHALLENGERS BANGALORE’S BOLD PERFORMANCE AT THE FORTRESS

Must say, Royal Challengers Bangalore played up to their strengths in the RCB v DD 2018 IPL match and the smile on Captain Virat Kohli’s face after the win was enough to prove this fact. We hope that there’s no looking back in the tournament for them from now onwards!

Written By
happeningheads
More from happeningheads
Hunting for good Indian restaurants abroad can be a tedious task especially...
Read More