Royal Challengers Bangalore’s bowing department finally clicked as they registered a 14-runs victory over the Mumbai Indians in RCB vs MI IPL 2018 match at the M. Chinnaswamy Stadium in Bengaluru. 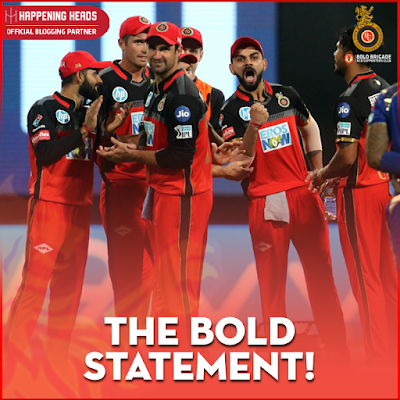 Rohit Sharma showed no hesitation in electing to field first at M. Chinnaswamy Stadium as soon as he won the toss. It was clearly visible that RCB has walked into this rivalry match with an intent to do something different and productive right from the start after Captain Kohli decided to Brendon McCullum back and send Manan Vohra and Quniton de Kock to open the innings.

Though Quinton de Kock didn’t live up to the expectations last night but Manan Vohra provided a steady start to the home team and also became the 1st uncapped player to complete 1000 VIVO IPL runs.

No batsman from RCB managed to score big in yesterday’s game but handy contributions from the top and middle order made sure that the scoreboard keeps on ticking. There was a time in the last few overs when Royal Challengers Bangalore were even struggling to put 150 on board but Colin de Grandhomme unleashed his superpowers and thrashed Mitchell McClenaghan all over the park to collect 24 valuable runs in the final over of the 1st innings.

Considering RCB’s bowling form in this tournament, even the target of 165+ runs seemed to be difficult to defend initially but to our surprise, Royal Challengers Bangalore’s bowling attack looked way too disciplined and accurate against the MI paltan. The pacers were dominating like a boss and Mumbai Indians lost half of their side with just 84 runs in 12 overs.

Although Pandya brothers did their best to balance the situation but Tim Southee and Mohammad Siraj kept their nerves to never let winning pendulum swing the other way. Also, we would like to credit RCB’s electrifying fielding in death overs which caught everyone’s attention in a flash.

Captain Virat Kohli dedicated this victory to all the RCB fans, who were eagerly waiting for it and to his wife – Anushka Sharma on occasion of her birthday. We hope Royal Challengers Bangalore keep up with this momentum in the tournament and try to finish as higher as they can on the points table!


Stay tuned to our partnering Fan Club – Bold Brigade for all the updates related to the Royal Challengers Bangalore team in VIVO IPL 2018.

Written By
happeningheads
More from happeningheads
There’s no better thing than luxury and good food combined together and...
Read More