India became the first nation to engrave their name on the ICC Under-19 World Cup for the fourth time after beating Australia by 8 wickets in a rather one-sided finale at Bay Oval. The boys in blue dominated the tournament thoroughly and their undefeated record is enough to prove this statement! 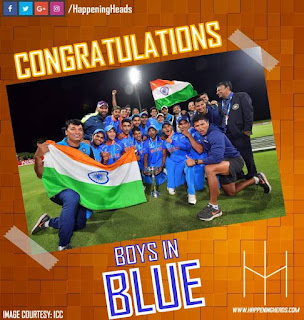 Along the journey, the young Team India found many positives but following are the ones which stands out according to us:

The way Team India’s Wall – Rahul Dravid used all his experience and guided the young guns right from the preparations of the World Cup to play in the actual fixtures was worth a watch. His trait of laying with grit and determination in tough situations was clearly visible in his deputies too. The World-Cup victory is the proof that he managed to channelize the energies of these young lads in the right direction and we are super happy that even this legend has a World Cup in his kitty now!

The way Prithvi Shaw had led his side in the ICC Under-19 Cricket World Cup shows that he is equipped with a great leadership quality. From opening the batting with aggression to constantly motivating his bowlers and fielders in the field, he made sure that he leads the team by an example!

Getting awarded as Player of the Tournament in an ICC event is one tough task but not for players of Shubham Gill‘s caliber. This opener from Chandigarh has definitely made his mark in the tournament, credits to all the shots he has in his inventory. We are definitely gonna root for him in the upcoming season of IPL!

In a batting dominated nation, Kamlesh Nagarkoti has managed to snatch the limelight on himself like a boss with his ability to bowl at lightening fast speed. This army kid has stunned everyone by constantly bowling at a speed excess of 140 km/hr. Trust her, there wasn’t a better sight in this World Cup than watching him uproot the stumps of the opposition, followed by his trademark high jump celebration!

Winning such a big tournament isn’t possible without team effort, which seemed to be overloaded in this team full of young talent. No player shy away from contributing towards the nation and this is the reason why new match-winners began to emerge as the tournament progressed.

Fame will pour in for these kids and not all of them may make it to the next stage but this is the moment to bask in their success and we wish all the best to each one of them, may they manage to make it big in life and continue to make our nation proud with their performances.