Paul Coelho has rightly quoted, “When you want something, all
the universe conspires in helping you to achieve.” This is what happened
with me when I was crowned as the winner by Sony Pictures
Network India Pvt. Ltd. and gratified with a golden opportunity of experiencing
the happening WrestleMania 34 LIVE in New Orleans, LA! 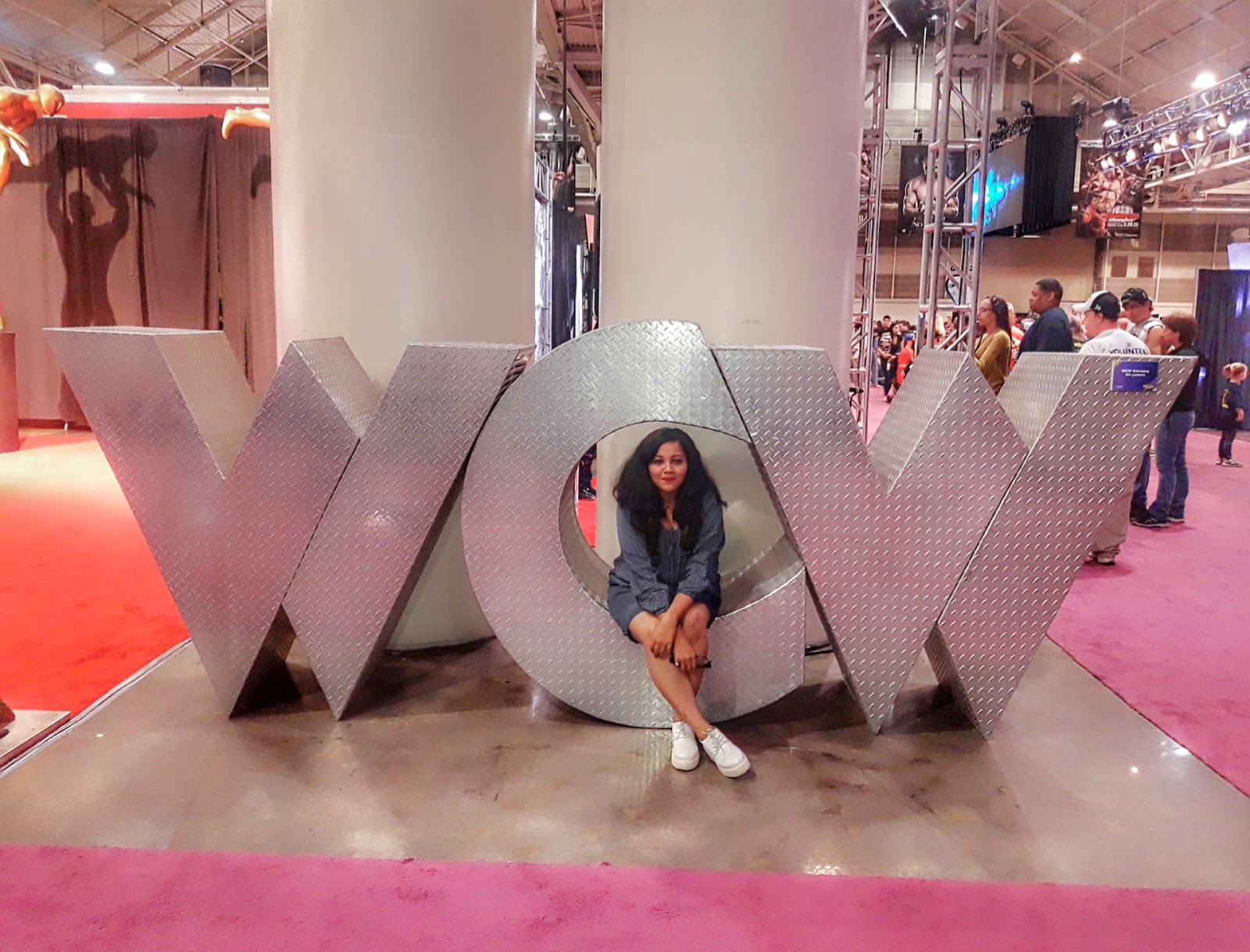 I still remember the evening of 12th March, 2018 when I was
scrolling through my mailbox and received a mail from Sony Pictures
Network India popped-up randomly out of nowhere. I was galvanized to know that they are
actually gonna fly 2 lucky winners of the contest to New Orleans in order to
witness all the action of WrestleMania 34 so I took no time in answering the
question posted by them but after watching thousands of responses on the tweet
and considering the fact that they are gonna select the winners through the
lucky draw, I hardly had any hopes, to be honest! But Sony Pictures Network
India Pvt. Ltd. Proved me wrong by choosing me as one of the 2 lucky winners on
2nd April, 2018. I was literally jumping in joy because I was about the witness
one of the biggest wrestling events which meant even more to me considering the
fact that I was one among the 90s kids, who used to ardently watch WWF (Well
that is what WWE used to be back then) in the evening. 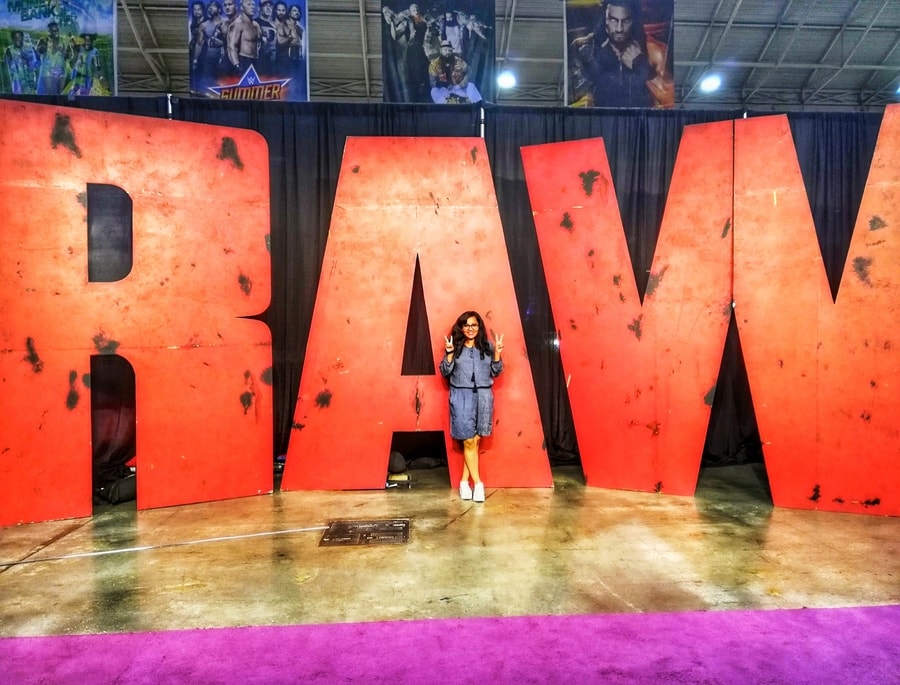 After more than 25 hours of traveling including a change of
flight, I finally reached New Orleans on a bright sunny Friday afternoon. I
wasted no time and quickly boarded an Airport Shuttle to the hotel with ‘WWE
Hall of Fame’ ceremony on cards, which was scheduled later in the day. 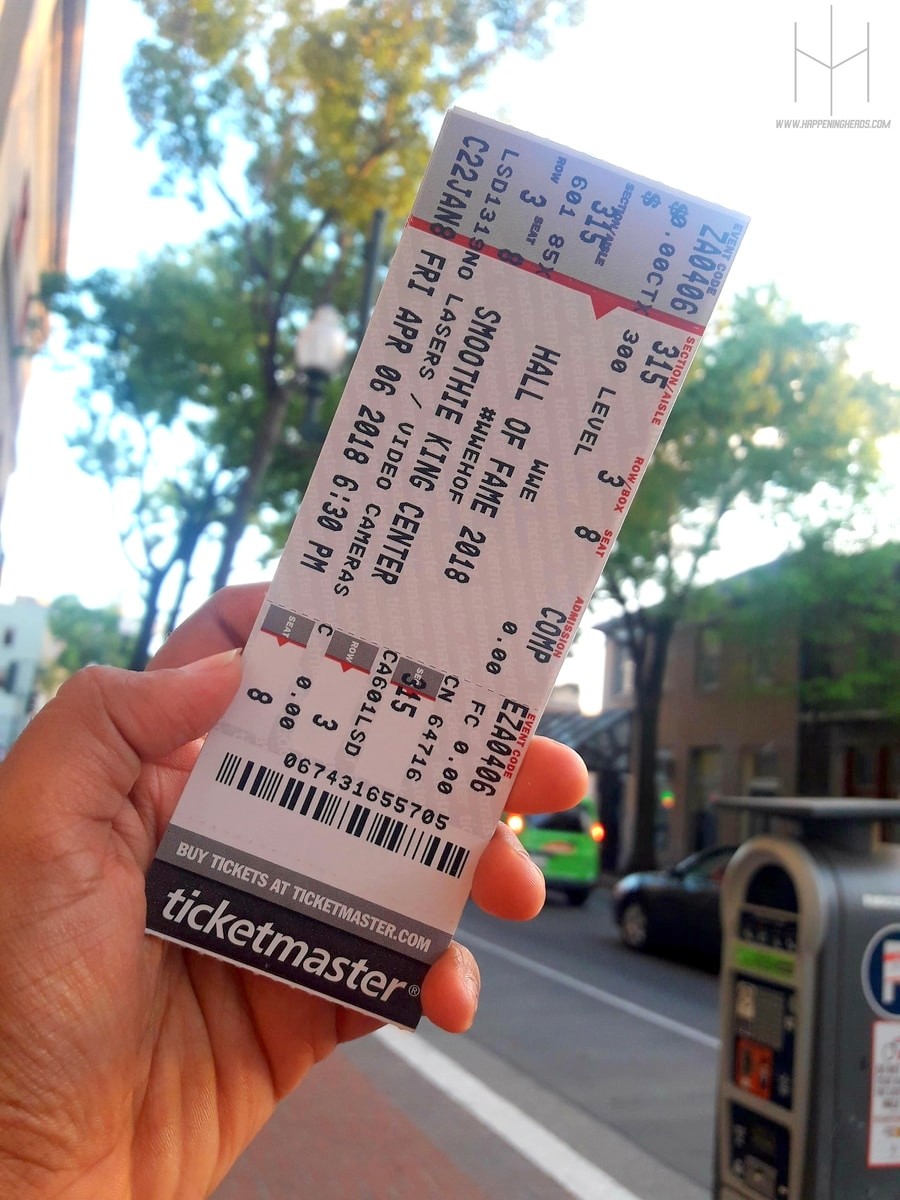 Post a much-needed shower, I quickly got ready, collected my
weekend tickets from the hotel reception and headed to the ‘Smoothie King
Center’ to attend the prestigious WWE Hall of Fame event where I got an
opportunity to watch various WWE Superstars and Legends including Goldberg, The
Dudley Boyz, Ivory, Hillbilly Jim, Jeff Jarrett, Jarrius “JJ”
Robertson and the mini version of The Rock who was a celebrity inductee for the
event! I was literally spell-bounded watching all of them and what added to the
awesomeness was watching the Class of 2018 enshrining into the WWE Hall of
Fame. I wouldn’t have asked for a better welcome from New Orleans than this,
being a die-hard WWE fan! 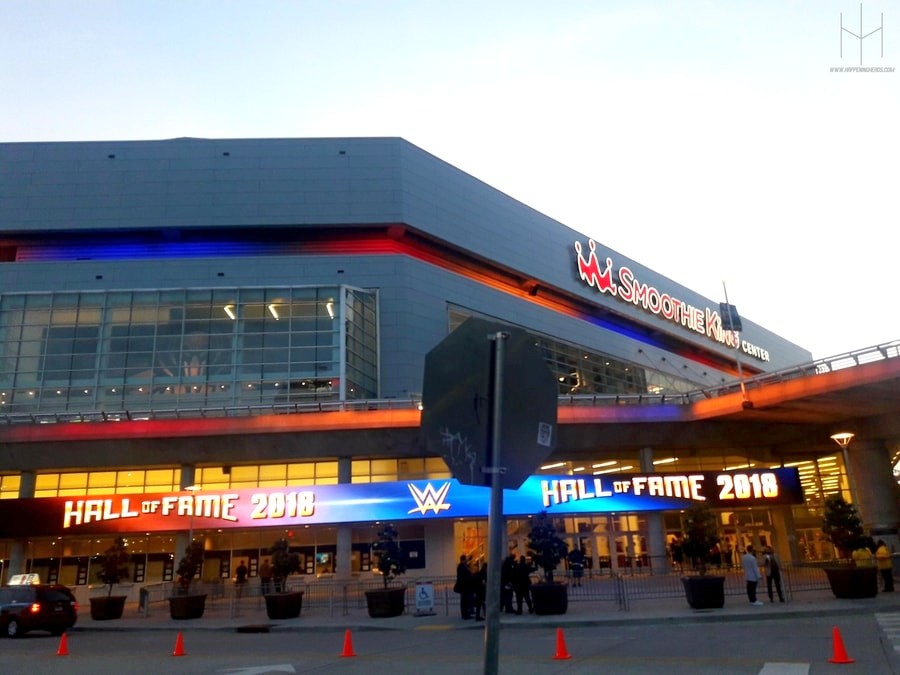 After completing a good night sleep, I was all pumped up for an
amazing Saturday with a couple of marvelous events lined up ahead in the day. I
made my way to the New Orleans Convention Center to attend the biggest
interactive WWE fan event of the year – WWE Fan Axxess, where I was blessed
with a golden chance to interact with WWE stars, click pictures with them and
get autographs from them. It was certainly a great session and meeting the
wrestlers whom we love watching in action on our TV sets was indeed a
noteworthy experience.

It was time for NXT TakeOver later that evening for which I
headed back to the Smoothie King Center. It was finally time to witness the
wrestling action and I was certainly high on the excitement for the same. 5
matches were contested at the event but what caught everyone’s attention at the
arena was the main event in which Johnny Gargano defeated Tomasso Ciampa in an
Unsanctioned match and was reinstated to NXT. That specific match-up also
received a 5-star rating from the known wrestling journalist, Dave Meltzer and
witnessing it live, I can confirm the worthiness of the same! I would like to
admit that throughout 3 and half hours of this event, my mind was constantly
thinking that if NXT TakeOver is so thrilling to watch, imagine how
power-packed WrestleMania is gonna be – which confirmed that I’m surely gonna
have a sleepless night ahead with my head buzzing with the excitement!

The rising sun of Sunday morning brought a new ray of hope
and energy as I was about to live my dream of watching the 34th edition of
WWE’s most renowned event!

It’s almost time for the #WrestleMania34 & my excitement level has reached over the roof as my destiny is about to fulfil my childhood dream of watching #WWE Live! 😍 @spnsportsindia @happeningheads #WrestleMania #HHatWrestleMania pic.twitter.com/vKywuoKgBz

I sat down to check my social media profiles while
sipping a cup of hot piping coffee and all I could see is WrestleMania 34
trending all over, such was the excitement among the WWE fans across the globe.
Even the city of New Orleans was influenced with the epidemic of this grand
wrestling event and I figured it out when I had gone out for breakfast, where
everyone was either discussing about their childhood memories associated
with WWE or which all matches are they excited to see in WrestleMania 34. The
WWE fan in me was certainly in a comfort zone that time!

I decided to head towards the Mercedes Benz Superdome in the
early afternoon since the doors for fan entry were scheduled to open at 2:30 PM
and considering the fact that WrestleMania pre-show was gonna start at 4:30 PM
and the expected attendance for the event was sky high, I didn’t want to get
trapped in the sea of crowd outside the arena and miss even a bit of this grand
event. The pre-show lasted for a couple of hours and was much-needed to get the
audience in motion before the WrestleMania 34 kicks-off!

My waiting woes came to an end as the clock strike 7’o clock in the evening and the WrestleMania 34 was finally underway. Words aren’t enough to describe the feeling of being one among the lucky fans who were blessed with an opportunity to witness this wrestling extravaganza in front of their eyes.

I can proudly say that I got to witness some of the best matches at
WrestleMania 34 including Brock Lesnar vs Roman Reigns, Kurt Angle vs Triple H
& Stephanie McMahon, AJ Styles vs Shinsuke Nakamura, Charlotte Flair vs
Asuka, The Miz vs Seth Rollins vs Finn Balor and much more! As a big fan of
Brock Lesnar and follower of his significant career, watching him retain the
Universal Championship with his fierce wrestling skills certainly made my day
in true sense. 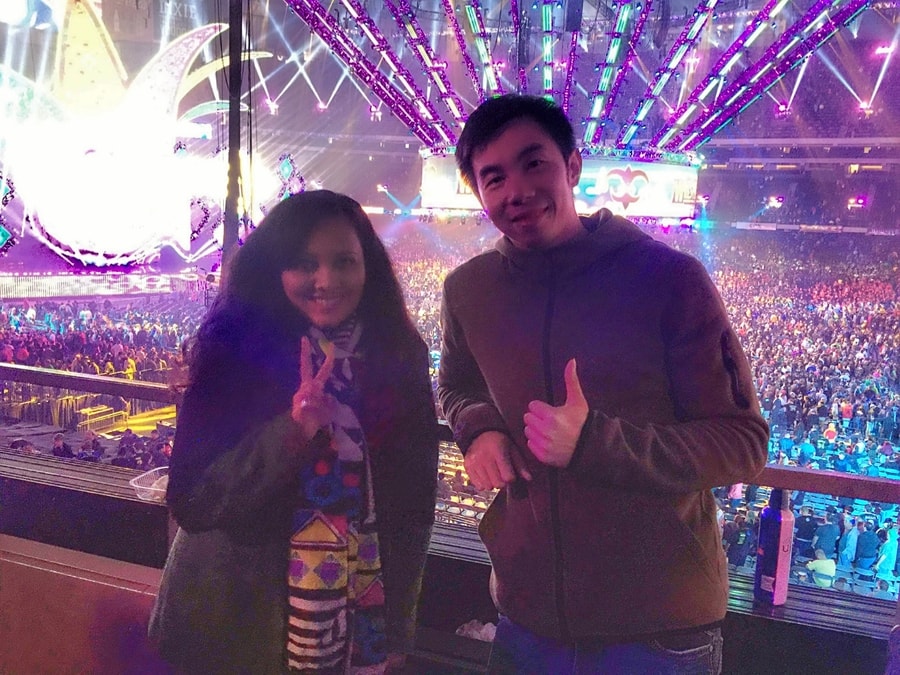 I was accompanied with 59,899 fellow WWE fans who had traveled
from various parts of the world like me who made sure that the atmosphere at
Mercedes Benz Superdome stays electrifying till the end. 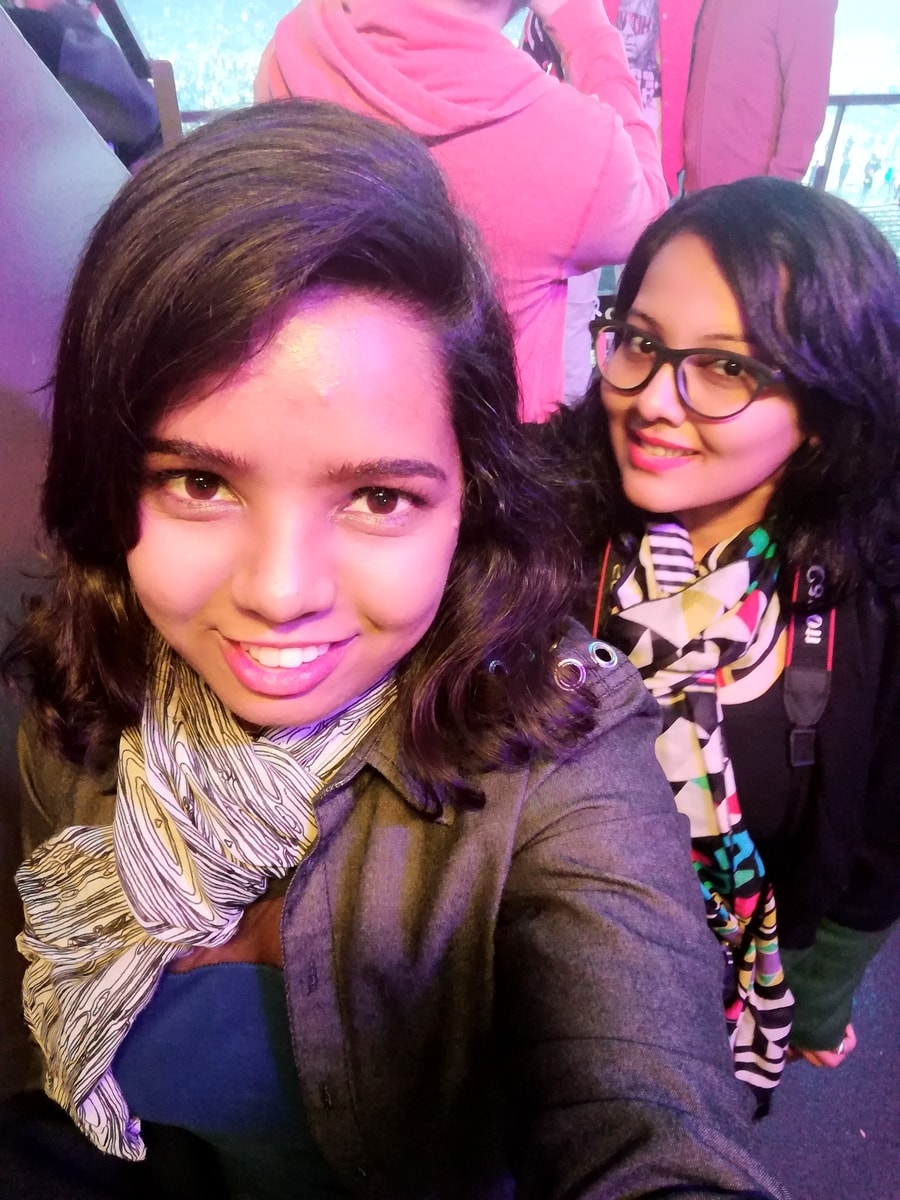 After 4 hours of
vigorous wrestling action and living my dream (literally!), I was delighted to
the core!

The time to bid adieu to New Orleans had arrived. After
spending 3 good days and being part of miscellaneous WWE events, I was surely
carrying an extra baggage of memories with me on my way to India which I will
treasure for life. Also, I would like to thank Sony Pictures Network and WWE
for providing me with this privileged experience which meant a lot being a WWE
fanatic since I was a kid.