Skipper Virat Kohli led from the front and guided Royal Challengers Bangalore to 5-wicket win over Delhi Daredevils, along with AB de Villiers in a do-or-die match at Feroz Shah Kotla, Delhi. 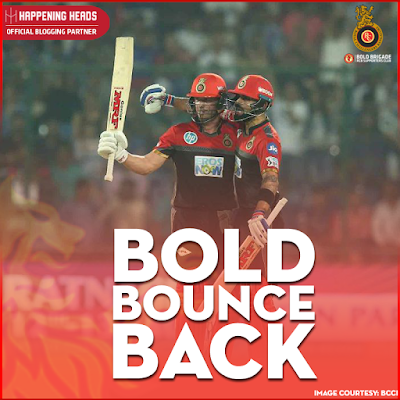 RCB’s wish to be in the top-4 of IPL 2018 can still come true, thanks to the impressive victory they managed to earn over Delhi Daredevils at Feroz Shah Kotla. Though Trent Boult and Sandeep Lamichhane drew an early blood on Royal Challengers Bangalore by sending their openers back to the pavilion at early stage but Virat Kohli & AB de Villiers’ bold duo showed no mercy to DD bowlers thereafter.
The best part about Virat Kohli’s batting in this crucial encounter was that he showed an aggressive intent, right from the start which pushed the DD bowlers on back-foot right away. He contributed 118 runs for the 3rd wicket partnership before getting out for 70 runs off 40 balls. Though, his struggle against the spinners in this tournament continues which can be a reason to worry for RCB in the upcoming crunch matches.
DD vs RCB IPL 2018 match was a must-win game for the Royal Challengers Bangalore and we are glad that AB de Villiers rose to the occasion and scored his 26th VIVO IPL half-century in the process of providing a responsible assistance to Captain Kohli. He remained unbeaten on 72 runs off 37 balls and ensured that RCB crosses the finishing line without any drama in the end.
Prior to this, Delhi Daredevils had manged to put on 181 runs on the board with the loss of 4 wickets in their quota of 20 overs – courtesy Rishabh Pant and 17-year-old Abhishek Sharma’s dynamic batting performance. Yuzvender Chahal once again proved pick of the bowler for RCB, finishing with the figures of 2/28.
AB de Villiers was awarded Man of the Match award for his blistering knock which included 6 sixes and 4 boundaries at a staggering strike rate of 194.59! Royal Challengers Bangalore will surely head to Indore with a lot of confidence for yet another important match against Kings XI Punjab.
ALSO READ – IPL 2018: ROYAL CHALLENGERS BANGALORE MADE THE BOLD STATEMENT BY CRUSHING MUMBAI INDIANS AT HOME

Written By
happeningheads
More from happeningheads
Lactose intolerance is a common condition affecting many people, making it difficult...
Read More